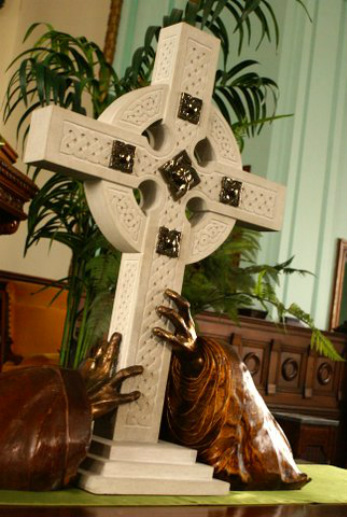 
The Celtic Cross created by member Jerry Carey was commissioned by the Session of the First Presbyterian Church in 2003 and dedicated on Easter Sunday 2004.

The Bedford stone chosen from a quarry in Ellettsville, IN. is the same cut of stone used to rebuild the Pentagon after the 9/11 attack.

The intricate stone design, a never ending design, was carved by Jerry Carey. Brass hands supporting the Cross representing the hands of Christ were made using the lost wax method and cast by Jerry Carey at the Indianapolis Art League.  The sleeves for the hands were also designed and made by Jerry Carey.